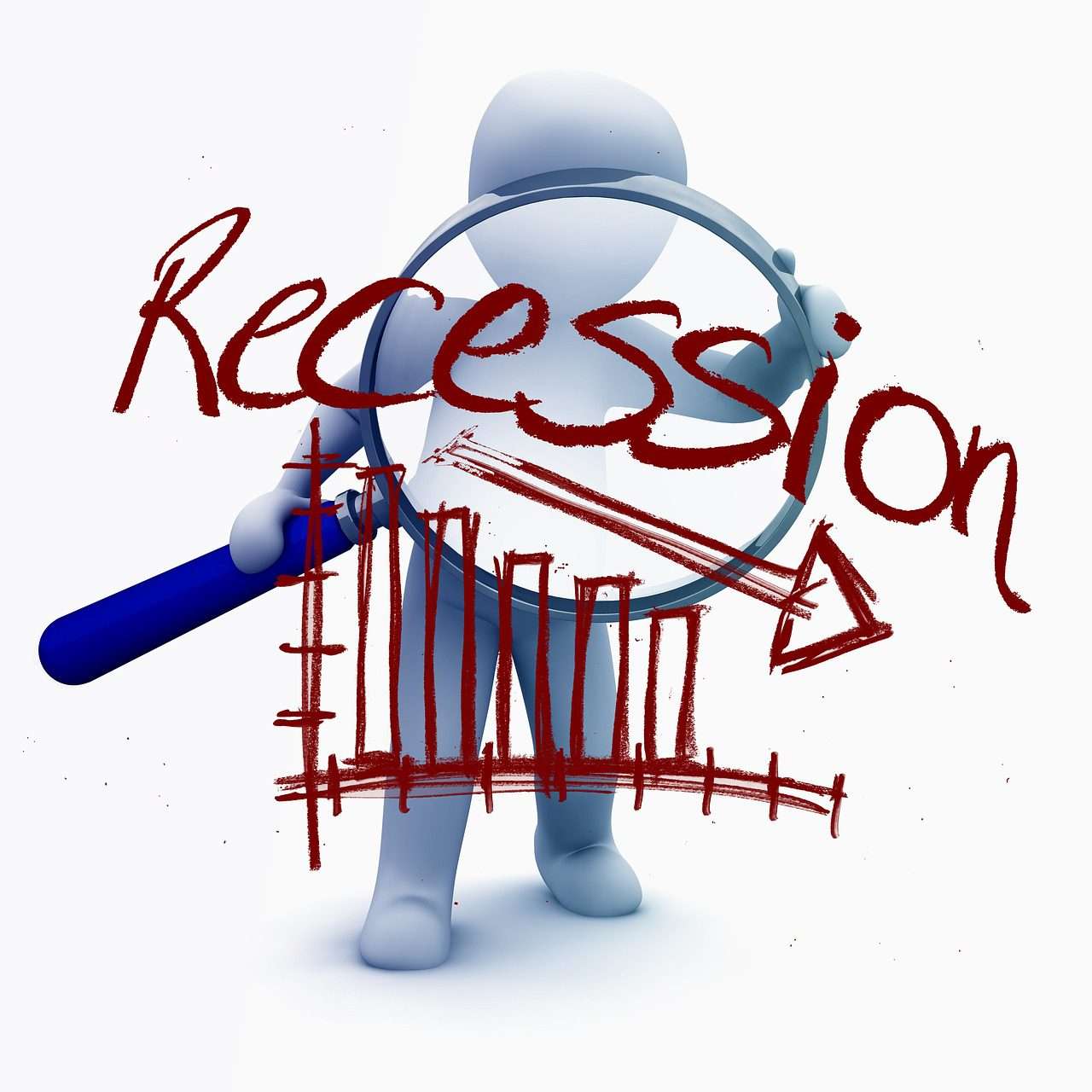 26th July 2022 All About That Money Leave a comment

A recession is a period of economic decline. During a recession, businesses and consumers alike cut back on spending. This can lead to higher unemployment and lower incomes.

A number of factors can cause a recession, including financial crises, natural disasters, and political upheaval.

While they can be difficult times, there are ways to weather the storm. By being smart with your money and making wise financial decisions, you can make it through a recession unscathed.

In this post we’ll explain everything you need to know about recessions, covering the following points;

What Is A Recession?

A recession is a period of temporary economic decline during which trade and industrial activity are reduced.

The definition of a recession can vary depending on the country. But it is typically defined as two consecutive quarters of negative economic growth.

Recessions typically lead to a decline in employment, as well as a reduction in wages and investment.

How Often Do They Occur?

Recessions occur every four to eight years, on average. However, there have been periods where recessions have occurred more frequently, such as the early 2000s when there were two recessions in a span of eight years.

There are also periods where recessions are less frequent, such as the late 1990s when there was only one in an eight-year span.

What Causes A Recession?

There are many factors that can cause a recession, but the most common one is when consumers spend less money. This can happen when people lose their jobs or when they become worried about the future and start saving more money instead of spending it.

When people spend less money, businesses make less money and may have to lay off workers or even close down completely. This can cause a domino effect, leading to more job losses and even more businesses closing.

High interest rates can also be a cause for recession. This makes it more expensive for businesses to borrow money and invest in new projects.

How Does A Recession Affect The Stock Market?

A recession can have a major impact on the stock market, as investors become worried about the state of the economy and start selling off their stocks. This can lead to a sharp decline in stock prices, which can in turn further damage the economy.

However, there are also opportunities during a recession, as stock prices may be undervalued and there may be more bargains to be found.

How Does A Recession Affect Businesses?

A recession can have a big impact on businesses, both big and small. During recessions, people tend to spend less money overall, which can lead to a decrease in sales for businesses. This can put a lot of pressure on businesses to cut costs and lay off employees.

Additionally, interest rates tend to go up during a recession, which can make it more difficult for businesses to get loans and invest in new projects.

However, not all businesses are equally affected by a recession – some may actually see an increase in sales as people look for ways to save money.

How Does A Recession Affect Consumers?

The effects of a recession on consumers can be severe. It leads to a fall in incomes and rising unemployment. This leads to a decrease in consumption and a rise in saving. As a result, businesses suffer from falling demand and are forced to cut production and lay off workers. The fall in demand and output leads to a further decline in incomes and an increase in unemployment. This spiral of falling demand and output can be severe, leading to a protracted and deep recession.

A recession also has knock-on effects beyond the economy. For example, it can lead to an increase in crime as people become desperate and turn to illegal activities to make money. It can also put strain on social cohesion as people become resentful of those who are doing well while they are struggling.

What Can You Do To Prepare?

No one can predict the future, but there are things you can do to prepare for a recession.

One of the best things you can do is to create a budget and stick to it. This will help you to save money and make sure that your spending is in line with your income.

Another good idea is to build up an emergency fund so that you have money to fall back on if you lose your job or have unexpected expenses. The SaveBetter savings marketplace can be a convenient way to do this.

Finally, try to diversify your income sources so that you’re not relying on just one source of income. These tips can help you weather any economic downturn. Find some inspiration in this list of 50 ideas to build online income streams.

And remember that recessions don’t last forever. With some preparation and planning, you can make it through unscathed, and even thrive.

Get started on your financial freedom journey today! Click here to get a $10 sign up bonus when you open an all in one checking and investing account with Acorns.

In conclusion, a recession is a period of economic decline.
It is characterized by high unemployment, low production and investment, and high inflation.

Various factors, such as natural disasters, financial crises, or government policies can cause recessions.

If you are worried about your finances, sign up to our newsletter and get more help with your personal finances on our blog.

Latest Posts: All About That Money

What Is Print On Demand?

There are a lot of business opportunities out there. But what is print on demand? And how can you make…

There are a lot of bad spending habits that can keep you from reaching your financial goals. In this post…

Gold Investment Guide: All You Need To Know

If you’re looking for ways to make money or preserve wealth, one option you might consider is investing in gold.…

Privacy & Cookies: This site uses cookies. By continuing to use this website, you agree to their use.
To find out more, including how to control cookies, see here: Cookie Policy
Thanks for letting us know!
This is how we improve bertha
What did you expect to happen?
Ask Bertha to Write About Anything
From email subject lines to full on blog posts and even Facebook adverts
Copy to clipboard
Add to Favourite
Report
Insert Default Content